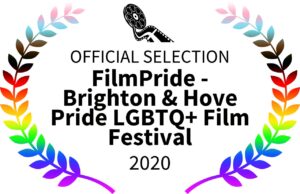 I hope you and your loved ones have stayed safe during these perilous times.

The next screening for CAROL will be in Brighton, UK, as part of FilmPride: The Brighton and Hove Pride Film Festival, August, 2020.

“We are Brighton & Hove Pride’s official LGBTQ+ film festival, now in our second year.
Like many festivals in 2020, due to the Covid-19 crisis, we’ve had to cancel our live events and switch to delivering our programme online. We’re proud to be bringing you over 50 fantastic LGBTQ+ short films, documentaries, animations and feature films, along with Q&As with some of the filmmakers. The FilmPride Online Film Festival will run from 17th to 31st August via our partner’s website, latestbrighton.”

Included in the program are:

I Know Her
Dir: Fawzia Mirza
In the afterglow of a seemingly fated hookup, two women realise that perhaps they have a little too much in common.

Cwch Deilen
Dir: Efa Blosse-mason
Through a striking illustrative style, this is the story of Heledd and Celyn, who navigate the undiscovered and murky waters of entering a new relationship.

Swivel
Dir: Lois Norman
What if, an intimacy of touch, a truth of want, Swivels around your doubt and trusts? What if, love is not a gender, it is a swivel of the heart?

Turn it Around
Dir: Neils Bourgonje
When fifteen year-old Bram falls for Florian at a house party, there’s only one problem: nobody knows Bram is gay.

Bath Time
Dir: Alice Trueman
Comedy sketch about the perils of taking a bath when you and your partner are feeling slightly different vibes… From the sketch web-series ‘Spoon the Prune’.

(F)our Seasons
Dir: Miguel Gabaldón
Throughout the four seasons of the year, four couples meet, live, split and meet again in the cities of Madrid, Chicago and New York.

Atomic Love
Dir: Imogen McCluskey
It’s 1988. Recently married Dana helps her eternally-single friend Aleea make a video profile for a dating service, provoking a confession which forces them to address the nature of their relationship.

Carol
Dir: Krissy Mahan
This short film is a parody of Todd Haynes’ 2015 film “Carol,” that presents a hilarious and necessary class analysis, with better sex.

Stallion
Dir: Zachary Smith
Reece, a closeted college football captain, struggles with the toxic behaviours of his teammates, and those behaviours bleeding into his relationship with his partner and fellow teammate, Beau.

Sappho Singing
Dir: Tzeli Hadjidimitriou
The lyric poet Sappho, presented as a modern woman, turns up in her birthplace, Eressos on the island of Lesvos, and moves among its modern-day inhabitants.