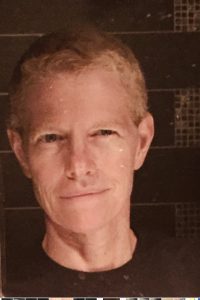 Krissy Mahan is a working class daughter, filmmaker, and artist. Over the past twenty years Mahan has developed a body of work exposing the absurdity of man-made barriers to human movement, happiness, and social access. Determined to create a world that is more fun for everyone, Mahan learned to make movies in the early 1990s and hasn’t stopped amusing herself since.  Mahan’s screenplays distill social situations in a way that encourage the audience to follow specific humorous personal narratives and see their relationship to the whole. Before teaching in public elementary schools, Mahan was a professional Mx Fix-It, and certified Aging-In-Place Specialist (2011-) trained in modifying living spaces to be compliant with ADA standards.  Mahan supports the cultural boycott of the state of Israel.

Tired of seeing my friends’ queerness and queer lives erased at funerals during the AIDS crisis, I began making “dykeumentaries.” At that time, image making was a form of evidence-making: evidence that we lived, loved, existed. Coming out during the height of the AIDS years working class and other queer people were met with a growing white middle class queer culture eager to show how deserving white homosexuals were of full citizenship in the genocidal American, capitalist, white supremacist project. Alternately, some queer people chose to focus on how SEPARATE they are from straight culture, existing within only the context of their sexuality.

Recent themes in my movies of the last few years: hand-building my own sets for Fisher-Price people, and a superhero action figure of myself going out into the world and exposing physical barriers to access.

As the second daughter in a hardworking family of six, I saw the importance of humor. It’s how we got though. Naturally, I’m excited to tell funny stories about, and to, working class people dealing with the absurd difficulties of 21st century life in the post-industrial northeast: surviving in failed economies, adapting to aging bodies (our own and our parents), and challenging the racism and xenophobia that is being encouraged in poor communities. I’d like to bring visibility to everyday queers like me to become the force for good that we can be.

I am an unrepentant optimist, even though I was blive and work Camden County, NJ, one of the few places in the US to have both rural and urban impoverished school districts. I am from here, left when I came out, but have moved back home to take care of my mother. I love to play soccer.

(South Jersey) creates and shares media that centers social issues such as accessibility, gender identity, mental health, immigration, and working class post-industrial cities. A passionate idealist with a flair for the fabulous and humorous, in autumn 2019 Mahan’s films will screen in Glasgow, Detroit, Philadelphia, London and at the Respect Human Rights Film Festival in Belfast, Ireland.

Here’s a broadcast interview from Summer 2018